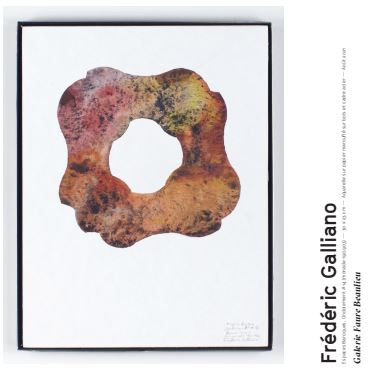 For his first solo exhibition at the Valérie Eymeric gallery, Frédéric Galliano is presenting a new series of works entitled «Baroque spaces», consisting mainly of watercolours on paper and aluminum sculptures, always around this reflection on the notion of monad.

However, it immerses us in a new language, far from the classicism and the usual rectitude of the artist, to immerse us in a baroque universe where movement, ripples and drama have been summoned.

Definitively inscribed in references to the architecture of Borromini or the work of Rubens, At that time, his works borrowed the most striking features of this renewal and redefined his works in a dizzying register where his monads were unexpectedly enlivened in convolutions, swellings and magmas.

This new series is also part of a reflection on the notion of ripples that Leibniz says is about like when you throw several stones in the water at the
times, each of which makes circles, that cross without destroying each other, but when the number of stones is too large, the eyes merge» (letter to Sophie-Charlotte).